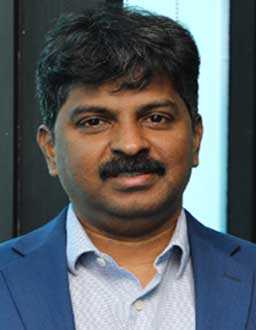 Murugavel Janakiraman is the Founder and CEO, Matrimony.com – whose flagship brand is BharatMatrimony, the No. 1 and most trusted matrimony service. The company is powered by 3000+ employees across 130 branches in 20 major cities in India. Matrimony.com is India’s first pure play Consumer Internet Company to be publicly listed.

In 1997, he pioneered the concept of online matchmaking that changed the way Indians marry.

Twice he was nominated by The Economic Times for the “Entrepreneur of the Year” award. He has been featured among Top Technology Leaders 2020 by Exchange4Media's Impact Magazine, recognised as a “Disruptor” in the Technology domain by Your Story besides awarded Digital Entrepreneur of the Year by WAT. He was also Chairman of the IAMAI (Internet and Mobile Association of India).

He looks at the matrimony service as a way to build a strong Bharat. “The future of a country depends on its Citizens. Good Citizens emerge from Good Parenting. Good Parenting happens in a Happy Marriage. And, we are the Gateway to Happy Marriages” underlines the purpose of Matrimony.com